These Are A Few Of My Favorite Things

❦ Music inspires me. I get story ideas while listening to music. And I create a special soundtrack for each novel when I write. It's hard to write without music.

❦ I love online creature collectible games. Currently, my favorite one is Magistream. I hoard Light and Dark Minicorns.

❦ I enjoy the art of Amy Brown and Luis Royo.

❦ I'm Wiccan, and my favorite holiday is Halloween. I host a party every Halloween.

❦ I love animals, but mostly cats and unicorns. 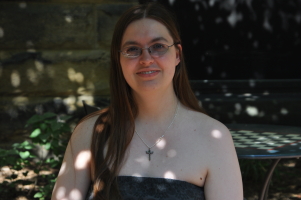 Picture Taken By Paul PopielAlexa Grave has been writing fantasy for more than two decades. She believes writing is a learning process, and there is always room to grow, no matter the stage a writer is in. Story, above all, is what drives her to write, the characters dragging her through their tales of love and woe.

Most of what she writes is dark fantasy, but she enjoys her attempts at the humorous side of things. It's not odd to find romance within her fantasy as well. She's also tried her hand at poetry, horror, and mainstream. The genre doesn't matter to her, simply the need to tell the story unfolding in her head.

She has an M.F.A. in Writing Popular Fiction from Seton Hill University (June 2012), and she is a member of Broad Universe.

Alexa's life isn't filled with writing alone. In her spare time, she enjoys gaming, whether it be on the computer, on a game console, or on her iPad. And she has a supportive husband just as addicted to gaming as she is. Reading and thinking up large, impossible projects to work on top her list of fun things to do as well.

Most importantly, she has two beautiful daughters who don't give her much spare time to do any of the above.

A lover of cats, she currently harbors the Trio of Terror, three kitty siblings whose persanilities are as diverse as their coat colors. Her thirteen-year-old goldfish, to the day of winning him at a fair, passed away on July 4, 2006. Until his death, he was the only thing in her life that was older than her love of writing.